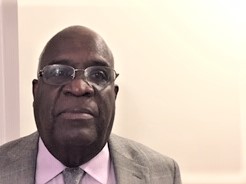 Although born in New York City, Alvin was educated in the segregated public schools of Wilmington, NC graduating from Williston Senior High School. Alvin credits the foundational education he received at Williston for whatever success he has had in his career.

He has a Certificate in Theology from the Interdenominational Theological Seminary and is a Certified Lay Servant in the United Methodist Church.

After retiring again, Alvin had his own consulting business, Johnson and Oliver, and was the Business Manager of a semi professional football team, the Carolina Cowboys.

Currently, Alvin is a member of Sandy Springs’  Board of Appeals.

Alvin’s main hobby is genealogy and he has taught classes in this subject for several institutions, including the Church of Latter Day Saints.

Alvin and his wife, Vera, have four children, four grandchildren and one great grandchild.